The NOT made in Germany new house 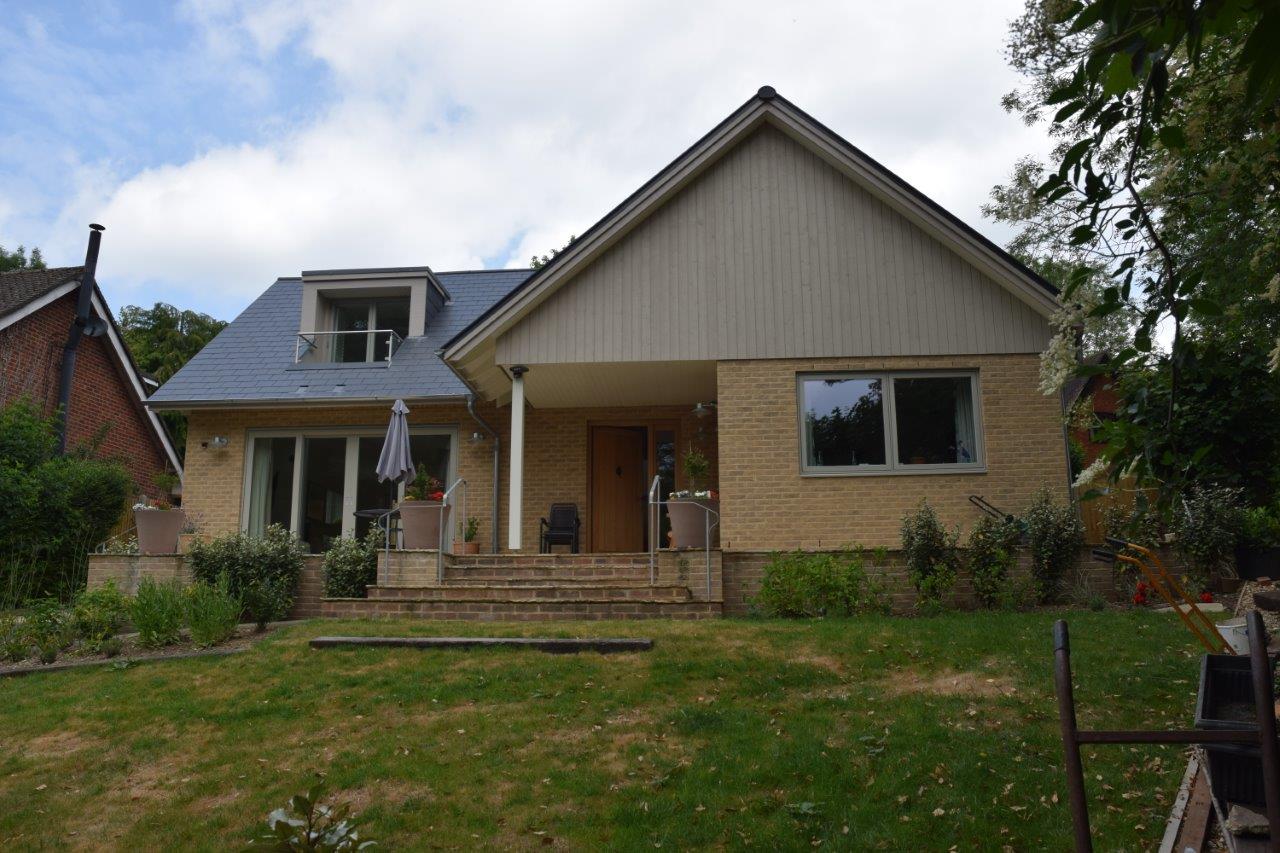 This commission followed the clients unsuccessful attempt to buy a prefabricated house from a German manufacturer. They got as far as securing a planning consent, which established the general design principles for the house.

What happened? In essence, the restricted access to the site, up a narrow lane, presented too many difficulties for the large deliveries associated with this full prefabrication method, and the German company did not proceed beyond planning. The frustrated client then took us on to help achieve the house by other means.

We developed the design to suit UK construction and the house uses a UK made timber frame with brick cladding. The frame company was well aware of the site constraints  and reduced panel sizes to suit delivery in smaller vehicles. In fact it became clear that we were able to take advantage of much greater flexibility than the German scheme, which had adopted some fixed ideas based on their standard ceiling heights and panel sizes. So we are confident that in design terms we have been able to affect considerable improvement.

The house is larger than immediately apparent. In addition to rooms in the roof there is a basement under a part of it, constructed in waterproof concrete. This adds spacious service areas and storage.

A part of the original attraction to the client of using the German prefabricated was the promise that the house would be well built with high insulation qualities. Again we are confident that we have bettered that. Some early analysis using PHPP based software (Passive House Planning Package) illustrated that the overall format of the house didn’t hold great potential to meet the full Passivhaus standard. Instead we aimed for the AECB standard https://www.aecb.net/aecb-building-certification/  of performance. The house has been thoroughly air-tested at various stages through the construction process and has achieved airtightness better than 1.5 ach.  The thermal envelope should meet the  annual heat demand  standard of less than 40 kWh/m2yr. We believe this to be a lot better than many houses built in compliance with the UK building regulations.

The whole house MVHR ventilation system is to a Passivhaus standard and essentially is inaudible. This also provides a continuous fresh air supply to the windowless basement areas. Summer cooling, when needing help, is aided by a large roof light over the central stairwell with electric opening, drawing air from the whole house.

Inside the house feels very spacious, light and airy. On our daytime visits we have seen little use of electric lighting. Our inspection after 12 months since completion has found little to report and the high build quality is evident.

Costs and value for money

After completion we made a comparison, as best we could between the actual cost of the build and the figures that had been quoted by the original German company. Of course, quite a lot of the overall cost lies within the elements that were not quoted for by them / not a part a part of their supply kit; ground works and concrete ground floors, external works including drainage, as well as utility connections, and kitchen and bathroom fittings.

However, overall our conclusion was that the cost of our UK builder /architect build route (including architectural costs) was probably very similar to the quote for the house using a German manufactured package. In addition we think that the product is much better adapted to UK preferences and more refined in its design detail, use of space, etc. We also believe that the environmental/energy performance is most likely superior (e.g. better insulation and windows). On top of all this the client has had the benefit of a great deal of attentive service throughout the project from ourselves and the builder, both remaining to hand for any follow-up issues.